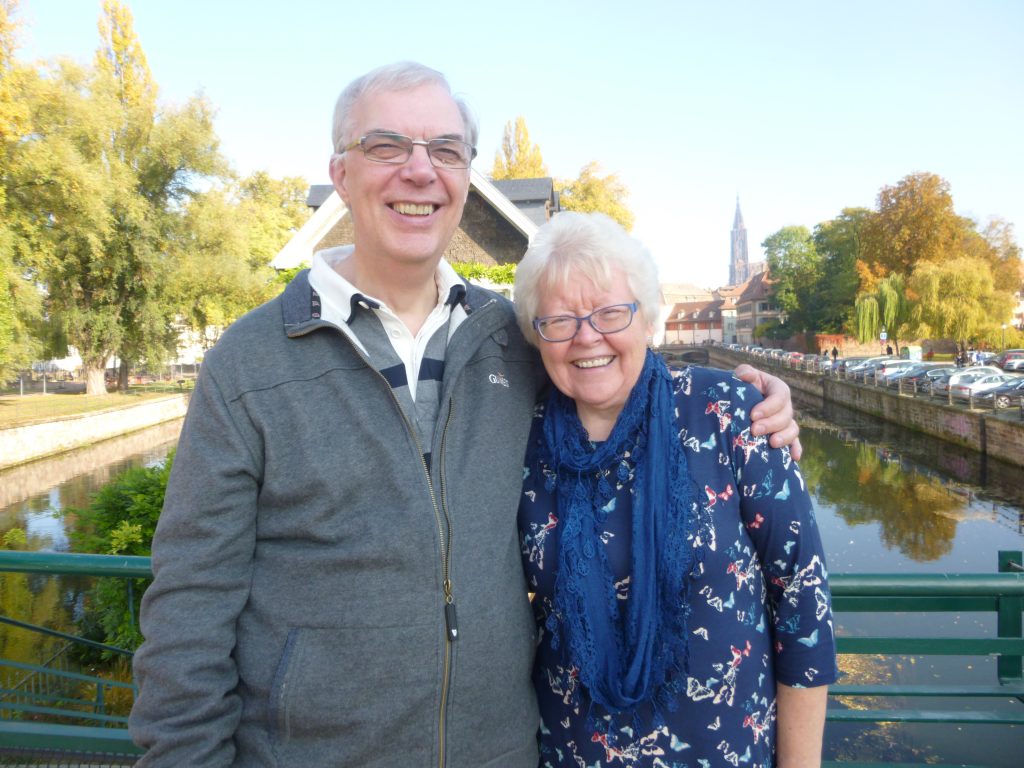 Val and myself have been involved in the prophetic for many years, but in 2014 God added art into the mix.

We were members of Jubilee Church, Derby, but in July 2017  some prophetic words and circumstances came together and we relocated to Lincolnshire.  We are now part of Market Rasen New Life Church.

Although I am the main artist, God has been making it clear that prophetic art is a ministry we have both been called into, using our differing skills”.

Below is a brief history of our journey so far in prophetic art.

This new season for us started back in August 2013 when I was told I would be made redundant. We both felt that I should accept voluntary redundancy and not look to be re-deployed elsewhere within the company. I knew it had something to do with art.

In December 2013, our eldest son (Stephen) sent a prophetic word he had for me. It arrived in the post the day I finished work!

“May this be a year of adventure, of risk, of new steps of faith that bless many and call more to know a glorious God who looks after his children. You have been so faithful in the small things, so faithful in your time and your money and we believe that God is going to blow you away with what he will do in the years to come. May your paintings bring money(!) but also bring light in the dark places, speak of our Father’s love, the Son’s grace and the Spirit’s embrace. Paint new things. Paint truths. Paint with God’s eyes. Step out – it’s going to be exciting!”.

In April 2014 I was given two books by the family for my 60th birthday, which continued this journey. They were “Born to create” by Theresa Dedmon and “Unlocking the heart of the artist” by Matt Tommey. Like many others, these two books awakened us to what God was doing by linking prophecy and art.

Over the next two and a half years God started teaching us about prophetic art and He has been unveiling to us what our role will be in this global movement of God. We have received several very specific prophetic words confirming our involvement in prophetic art.

One aspect of this journey has involved running prophetic art workshops. In 2015 and 2016 we were involved in workshops at the ChristCentral churches Devoted weekend in Newark. These were a great time where God demonstrated how He could use prophetic art to encourage, release and build His church. Since these events we have heard of so many more encouraging stories of what God did over those weekends and continues to do.

In 2016 we were involved in a workshop at the Pursuing His Presence conference in Derby, led by a team from Kings Church, Horsham. Another amazing time of seeing God encourage, release and build His church. It was no surprise that many of the testimonies of what God was doing during the conference came from the prophetic art workshop.  We repeated these workshops at the 2016 and 2017 conferences.

Since 2015 we have run workshops at other events and for small groups.

During this time God has been giving me pictures, which I have been painting and drawing. Many of these are included on this web site. Some have been drawn during church services for people attending that day. While others have been given during the week for someone coming to a church meeting.

As mentioned before, although Val would not call herself an artist, together God has been taking us on this journey of joining prophecy and art together.  God has told Val to start creating!

Another book “Shadow painter” by Laurie A Stasi in conjunction with a number of prophetic words helped to confirm our role and involvement in prophetic art.   These prophetic words also indicated that we needed to move from Derby.

Further, we believe that God wants to equip the whole body of Christ (His church) to work in community by using art and different types of creativity.

This will reveal the Glory of Heaven, bringing healing, wholeness and freedom to people. Increasingly, we can bring Heaven to Earth.

Therefore, our aim is to encourage and inspire all Christians to create visually what God shows them to His Glory.

This web site is yet another part of this exciting journey into prophetic art with Father.

As part of our move to Lincolnshire we have started a Gathering of Christian Artists of various disciplines and church backgrounds (Bara’ House Artists).  This will enable us all to explore Prophetic Art and our creativity and see where God wants us to take us next. Have a look at the Bara’ House pages on this website.

In September 2018, I was diagnosed with bowel cancer, which has spread to the liver.   We are believing God for healing.  We are thankful for the many friends who are praying with us.

We use cookies to ensure that we give you the best experience on our website. If you continue to use this site we will assume that you are happy with it.OkLearn more